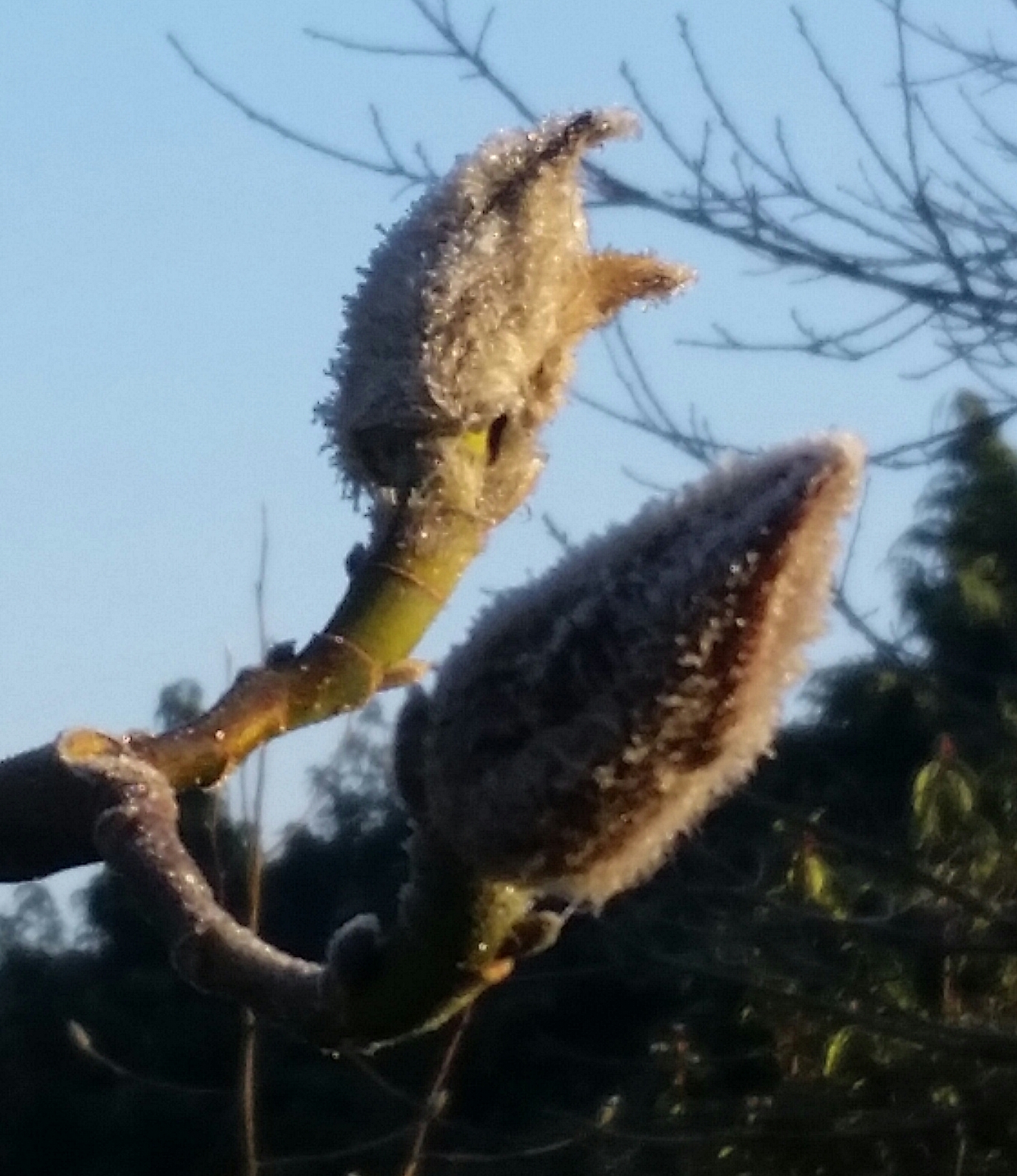 Usually we have a week or two of severe weather before Christmas, and this starts the process of
shutting down for Winter. Not so this year of so many oddities and contrasts; snow in March; Beast from
the East until nearly April; drought through June and July and again no rain since Christmas. I was even
watering some shallow rooted Autumn plantings to ensure that they survived for later this year.
That said we have begun with bulbs breaking forth earlier than usual. The first Daffodil was with us for
Christmas and the aconites, snowdrops and even crocuses are a month ahead of themselves.

The
Viburnums have been spectacular with Charles Lamont having the largest blooms and heaviest scent: it
is a real winner, planted by the drive so that we don’t miss it. Farreri Candidissima is the purest white with
all the others shading a range of gentle pinks. Our photo shows Farreri reaching a height of 20 feet:
matched by Bodnatense Deben which is the back marker at 45 years of age and the first to be planted
here. The Winter viburnum blooms recede if hit by frost but quickly return when it becomes warmer, so
they really are one of Winter’s delights.

The Lonicera Purpusii is another reliable performer. White to cream scented flowers bravely line the
branches through the coldest months. A new one, Lonicera Elisae, has larger blooms and is well worth
ferreting out. I bought mine from Pan Global.

The sharp North wind over the weekend has reminded us that Winter may still have nasty shocks for us,
and we are hoping that the Magnolias will be sensible and not let early warm days lure them out before
their time. We have protected a range of more tender plants, particularly for their first year or two. They
look snug in their little tents and came through the hazards of the late Winter and early Spring last year.
Some of these are early flowering buddleias, which are some of the gems we try to pamper through the Winter.

Our largest, B. Salvifolia alba, is too large to cover, but it does have the protection of a south-
facing wall and is already budding up. The B. Agathosma is busy shedding its leaves but so far look healthy enough. We grow cuttings just in case … !

From parts of our garden we have fascinating views of our ancient church. It is famous for its unique
tower, given by the first and only Viscount Lovell. He had been a ward of court and was brought up with
the King’s family, which included Richard III. He fought at Bosworth Field and disappeared afterwards. He
never surfaced again but left the village this wonderful legacy. He had the tower constructed by his
Somerset stonemason, according to the perceptive Niklaus Pevsner, who recognised a Somerset design
in Northamptonshire. It was used for an Armada beacon, having been added to a large church, built on
the profits of the wool trade. St Mary’s contains fine light-giving windows and a hand-written memorial
to John Dryden by his relative, Jemima Creed. If you come to visit the garden, do make time to see the
church, which is open all through the day. Guided trips can be arranged, led by a member of the
Titchmarsh historical society.