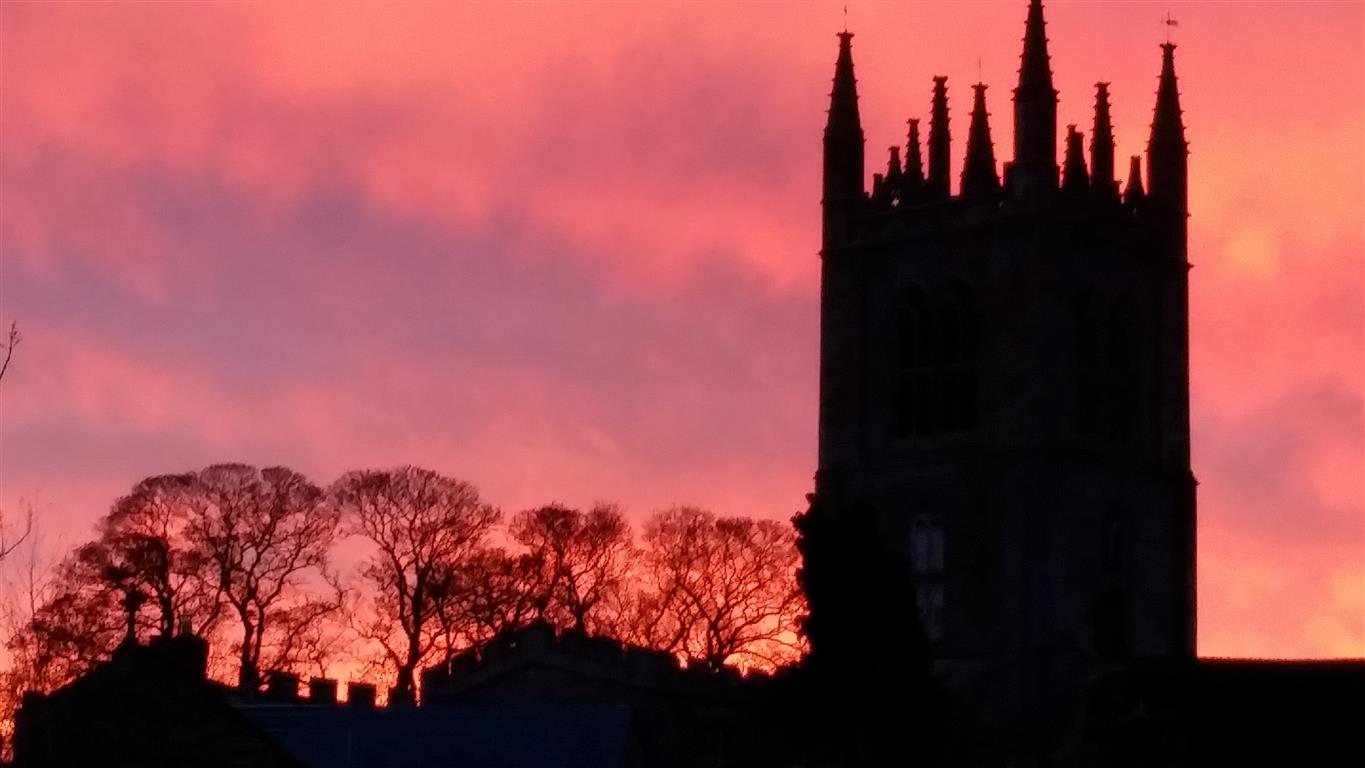 Most years we have around a fortnight of harsh weather before Christmas. This is the moment when dahlias and most herbaceous plants finally say Goodbye for the winter. This year has been no exception but it was unusual to have four inches of snow last Sunday. I wasn’t quick enough with my camera to get a picture of it and in particular to show the large wasps’ nest hanging from the higher branches of a Parrottia Persica. When I first saw it, I thought we had some strange formation of dead leaves and it was fascinating to see how it had been constructed. I wonder how many wasp hours that took!

We also have some wonderful sunsets at this time of year and the one showing our Church tower from the garden is as it was and is not over-coloured. The tower is 15th century, built by the Lord Lovell who fought with Richard III at Boswell Field and thereafter was a fugitive traditionally living in caves while trying to escape. Thanks to him we have one of the most wonderful towers in Northamptonshire. He was a ward of Court and therefore grew up as a boy with Richard before becoming one of his staunchest supporters. When you visit the garden please take time to drop in to the Church where there is also a remarkable wooden memorial to the poet John Dryden painted by his aunt.

I show photographs of two of the tree peonies we have planted this year. The Rockii is directly from the stock held in the Arnold Arboretum in the USA. Their strain is slightly different from the British ones we have and which flower so well for us. Last May one of them had over 50 flowers on it. The Helene Martin is a repeat of one of our favourites and is part of the new plantings on what was a grass tennis court. Helene is a hybrid of Potanini Trollioides and was introduced by the great French grower, Jean Cayeux, in 1986. It will be flowering at the same sort of time.

As we cut greenery for decorating the Church and enabling our eldest daughter, Jane, to make wreaths and table decorations to raise money for her small local primary school in Gillamoor, our thoughts turn to Christmas. Wherever you are we hope you will be blessed with a peaceful time and in good company.